So far, testing is apparently successful, with the total “incorectness” lowering continually. The desired outcome is that the space invader sprites give a “result” of 1 and the non space invader ones give 0. Testing is slow, but you can close and continue testing where it left off, without fear of data loss. 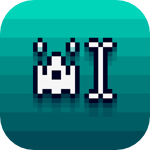